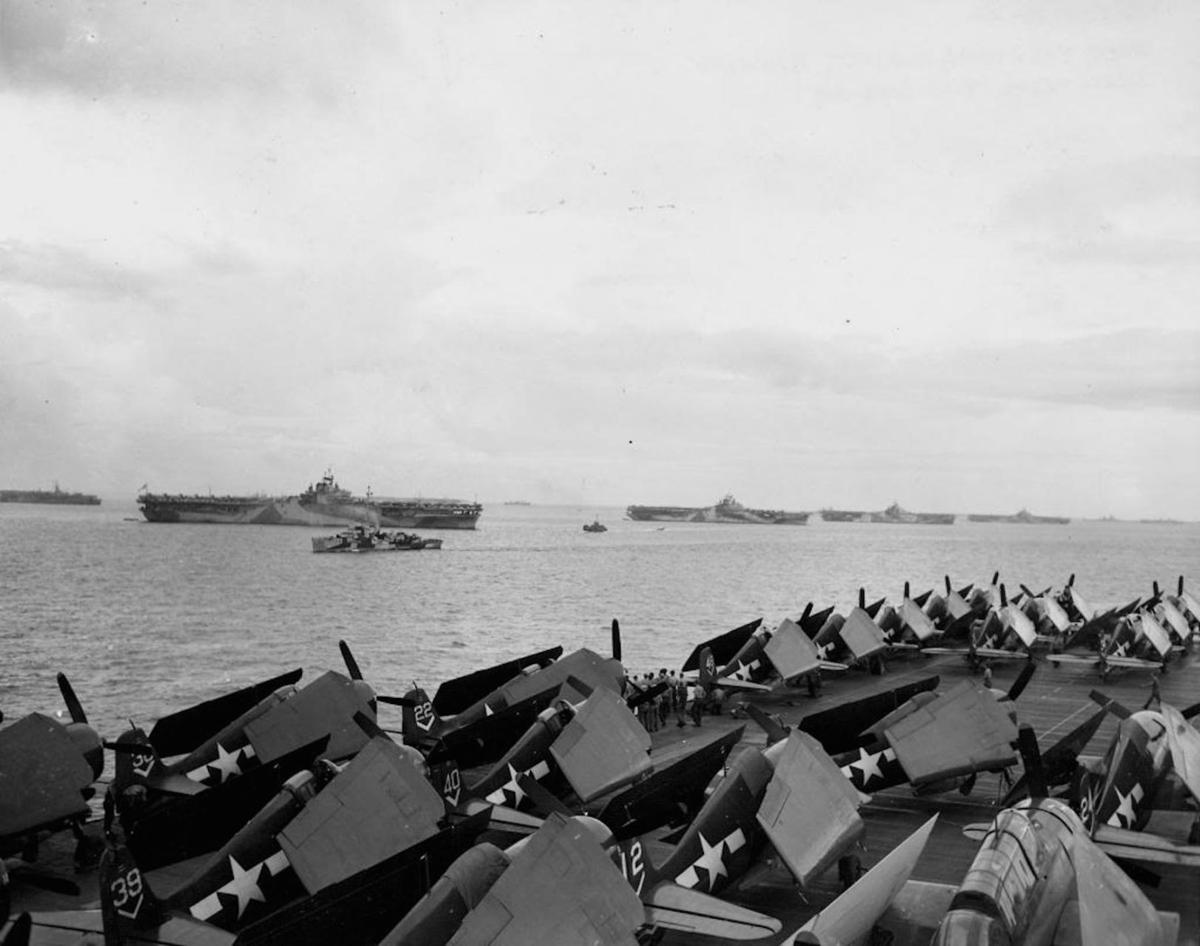 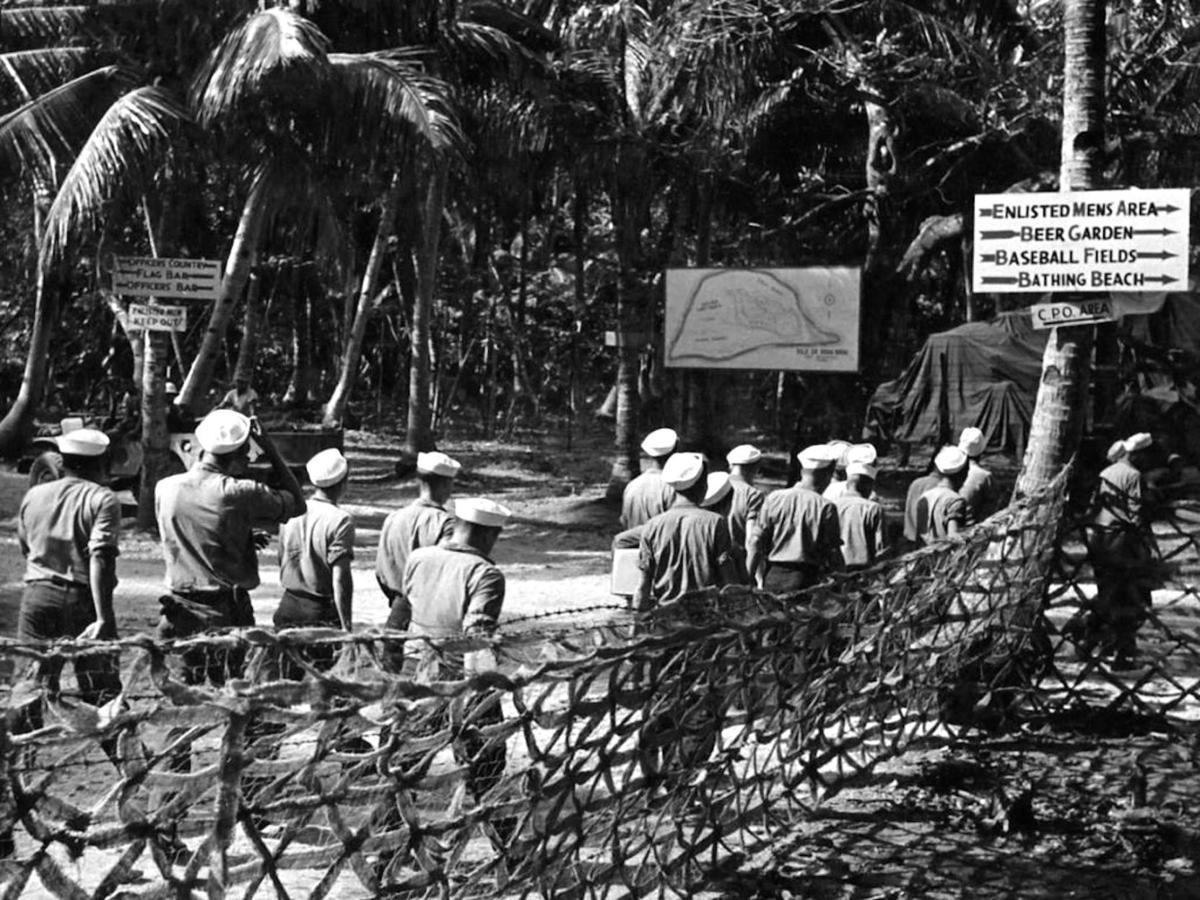 Mogmog in the Ulithi Atoll was offered a number of recreational opportunities for military personnel. 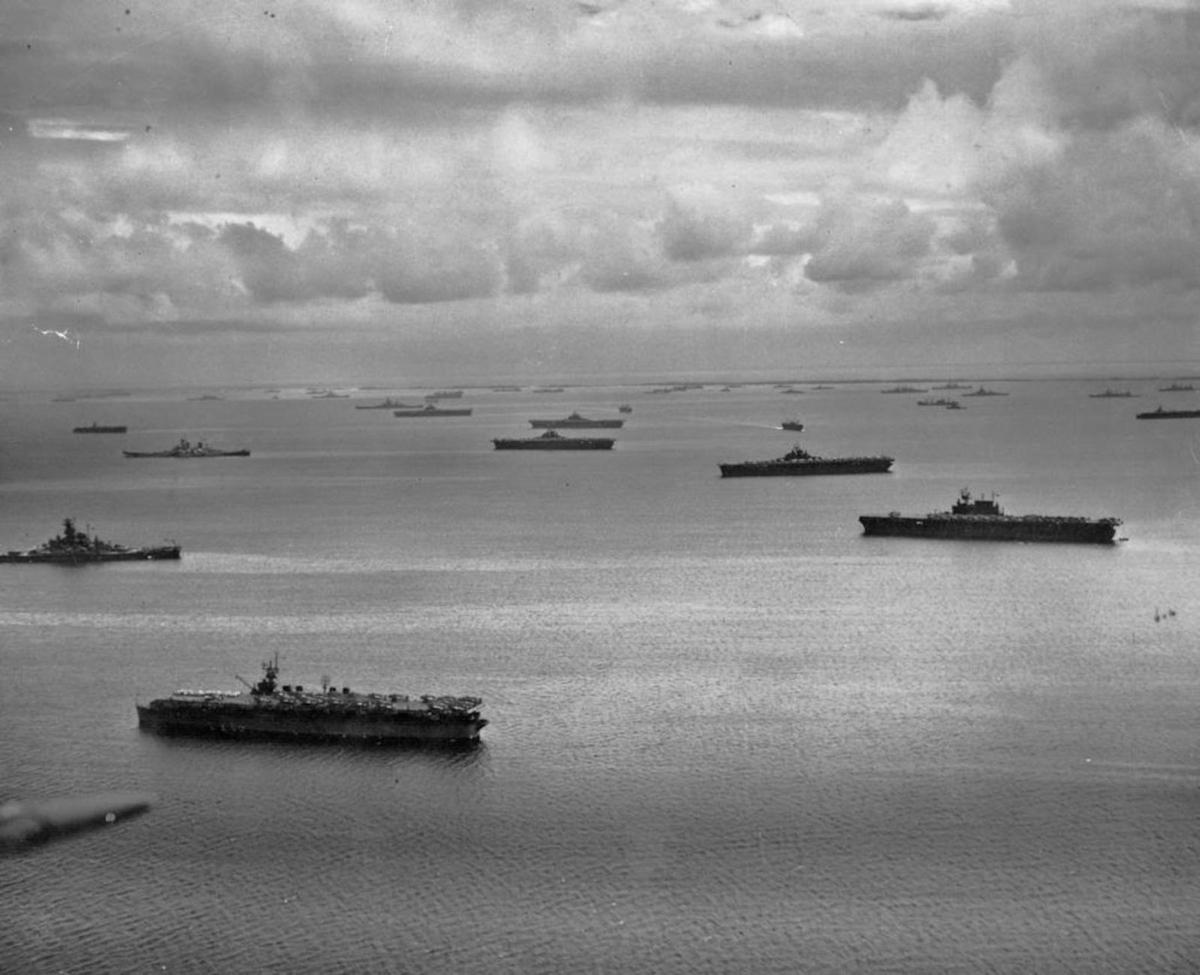 Ships of the 5th Fleet in the lagoon at Ulithi atoll. 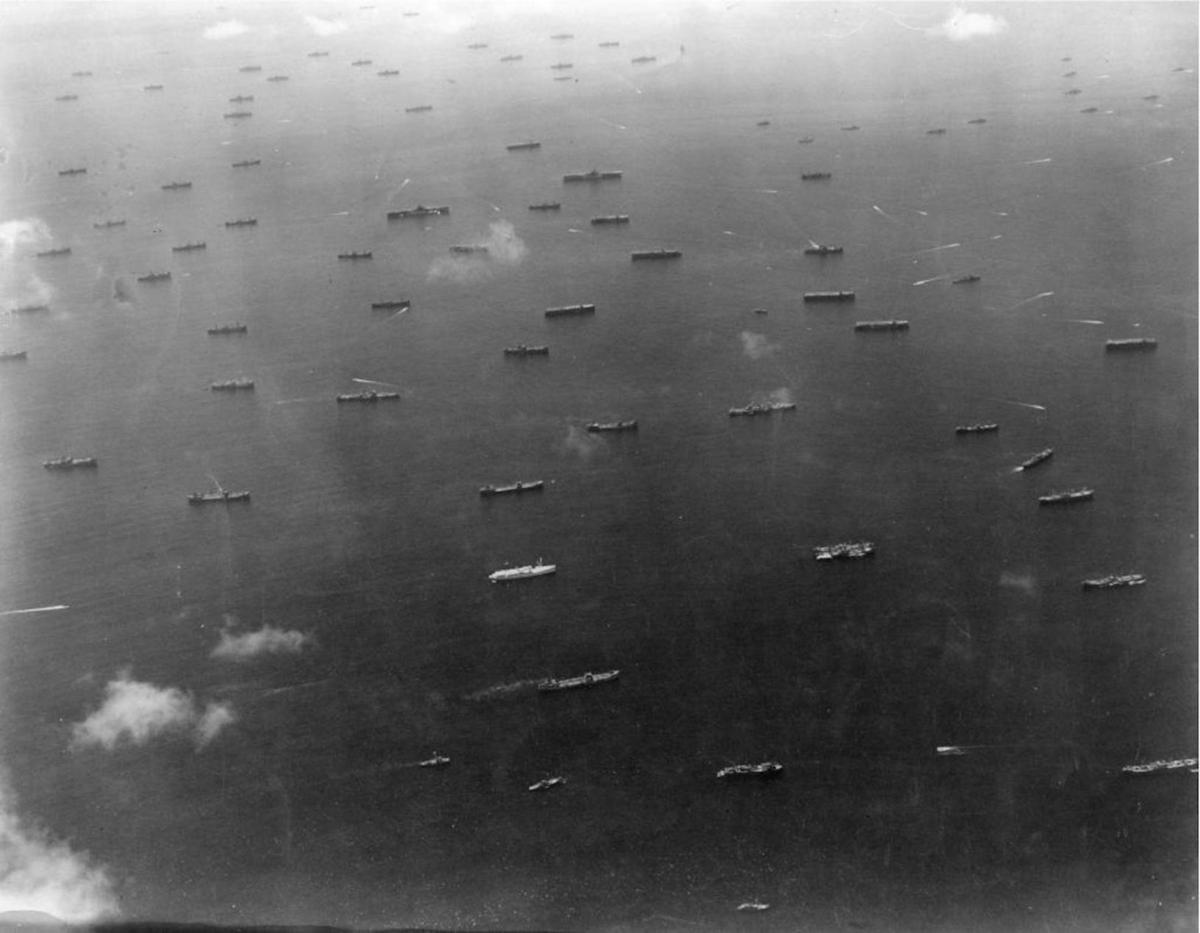 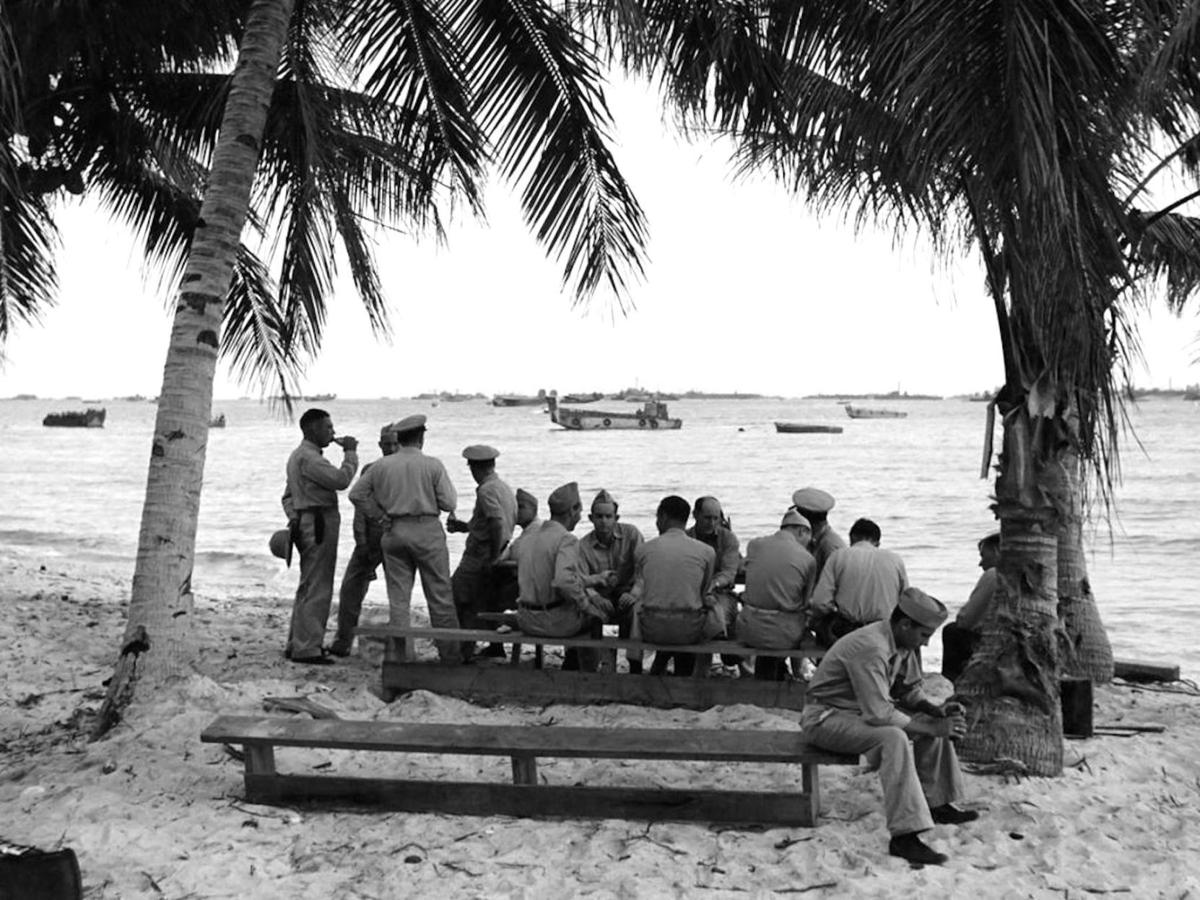 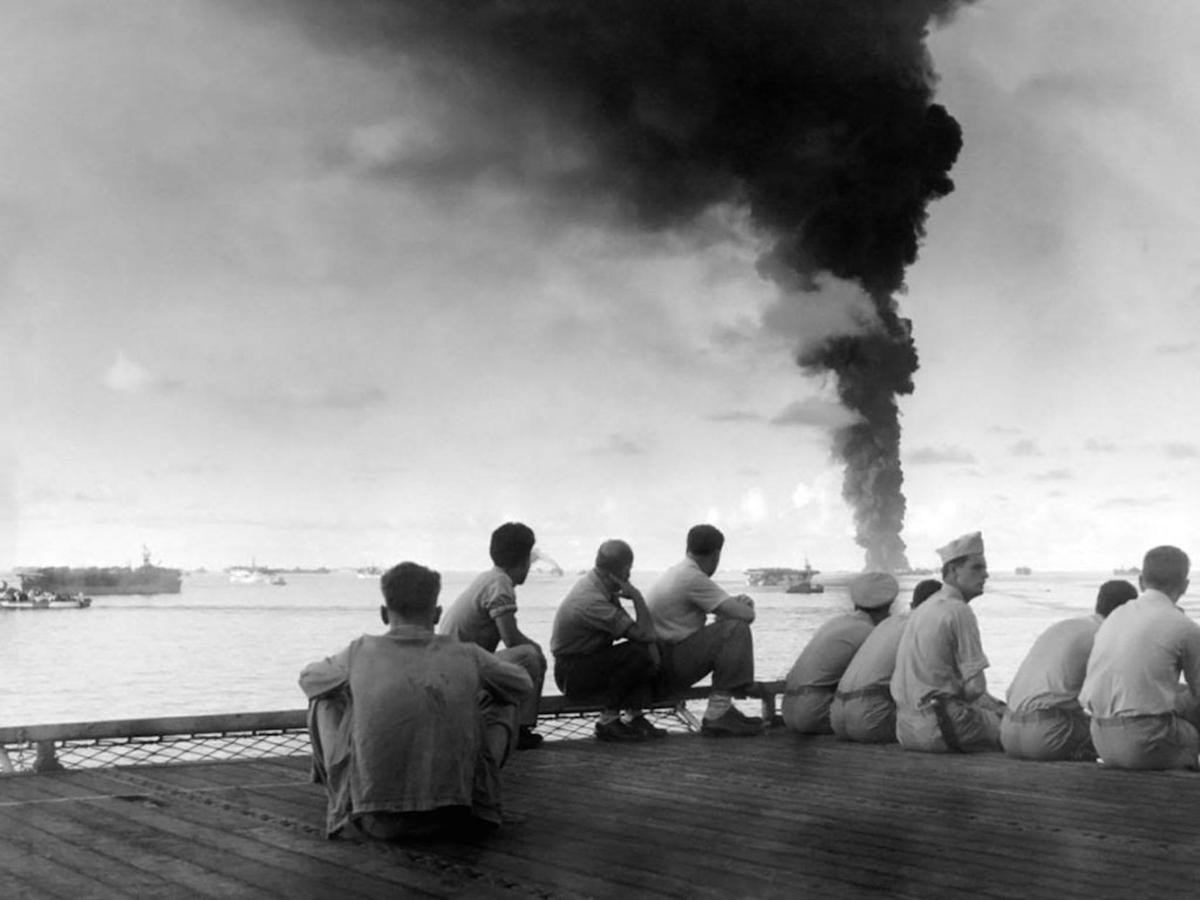 Servicemen watch as the USS Mississinewa burns off the coast of Ulithi. 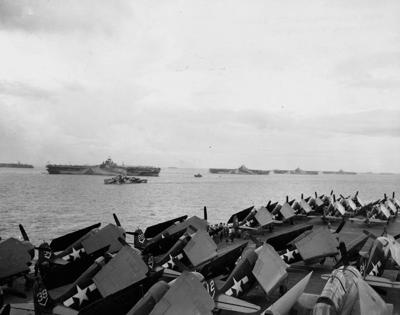 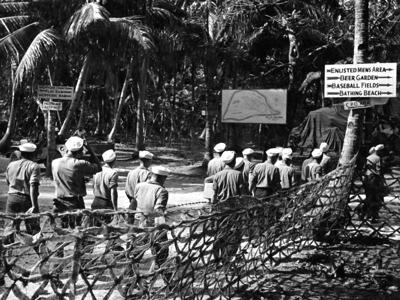 Mogmog in the Ulithi Atoll was offered a number of recreational opportunities for military personnel.

Ships of the 5th Fleet in the lagoon at Ulithi atoll.

Servicemen watch as the USS Mississinewa burns off the coast of Ulithi.

A Portuguese navigator is credited with finding Mogmog and several other small islands in the atoll in 1525. However, the first visit to the atoll was reported by a Spanish navigator on the ship Florida in January of 1528. He named the islands Islas de los Reyes (Islands of the Three Wise Kings in Spanish) since the visit happened on the eve of the Epiphany. Spaniards later charted the 40 small islets of the atoll as Islas de los Garbonzos (Chickapeas Islands in Spanish). Another Spanish expedition visited and explored the atoll in 1543, and it was later visited by Jesuit missionaries and 12 Spanish soldiers in 1731. Spain sold the islands to Germany in 1899, but they were later occupied by the Japanese in 1914 when The Great War (WWI) broke out in Europe. The League of Nations mandated the islands to Japan after WWI in 1920.

The 40 islands barely rise above the sea, and only four of them are occupied: Mogmog, Fedarai, Falalop and Asor. The atoll is pretty much in the middle of nowhere, 360 miles southwest of Guam, 850 miles east of the Philippines, and 1,300 miles south of Tokyo, with the largest island being only one-half square mile. However, the picturesque yet deep lagoon is one of the largest in the world: 22 miles long and 15 miles wide. Located in the westernmost Carolina Islands in the western Pacific, the lagoon and its tiny islands became a major staging area for the United States Navy during the final year of World War II. The entire group is collectively called The Ulithi Atoll.

At the outbreak of the WWII, the Japanese established a radio and weather station on Ulithi and intermittently used the large lagoon as an anchorage. As the U.S. Navy moved their enormous fleets westward, the Japanese abandoned Ulithi by 1944. The U.S. Navy needed a forward base for its “westward ho” strategies, and the tiny islands of Ulithi fit the bill. Problem was, no port facilities existed. Ulithi Atoll was basically an untouched and undeveloped piece of paradise with no electricity or running water. The locals considered sea turtle eggs and giant coconut crabs a delicacy but had little use for the swarms of rats. Time had come for good old Yankee ingenuity.

A regiment of the Army’s 81st Division stormed the Ulithi shores on Sept. 23, 1944. They met no enemy opposition, only native men in loin cloths and women in woven skirts without tops. A battalion of Seabees soon arrived and a survey ship, the USS Sumner, studied the lagoon and reported its ship capacity level greater than Pearl Harbor, approximately 700 Navy ships could occupy the lagoon. The islanders were relocated to the Island of Fedarai for two reasons: they would be in the way of construction, but most importantly, by moving the islanders it put them out of Harm’s Way in case of Japanese attack.

Next, Admiral Chester Nimitz sent in a “secret weapon”: Service Squadron 10. These men were specialists, devising the plan to covert tiny Ulithi into a secret major naval yard in the middle of the Pacific to be used for upcoming key operations, including Okinawa and Leyte Gulf. First, Service Squadron 10 sunk 4-by-12 pontoon sections filled with gravel and sand, then anchored them in place with iron rods driven into the coral and resilient ropes attached to shore. Unbelievably sturdy and strong, the piers fashioned from the pontoons withstood the intermittent extremely heavy windy weather in the area.

Within one month, Yankee ingenuity converted an insignificant coral atoll into the most significant naval anchorage in the vast South Pacific. Included in the personnel arriving at Ulithi Atoll: 6,000 welders, ship fitters, skilled carpenters, electricians, and artificers on repair ships, floating docks, and destroyer tenders. Need a part that’s hard to find? One can be easily built aboard the air-conditioned USS Ajax, a metal fabrication ship. Need a distilled cool drink? How about a piece of pie or baked beans? That was the job of the USS Abatan. Oh, and don’t forget to visit the ice cream barge. It produced 500 gallons of ice cream per shift. Need to repair a 45,000 ton battleship? The massive dry docks towed to Ulithi were large enough to hoist one out of the water. Need rest and recreation? The microscopic island of Mogmog became a playground for U.S. military personnel.

Beyond the ice cream and baked beans came the serious work of war. Fully loaded oilers sailed from Ulithi and rendezvoused with various task forces to refuel warships just a short distance from war zones. This was something entirely new: basically a floating refueling station allowing the Pacific fleet to operate at unheard of distances from major land bases such as the ones in San Francisco. By comparison and to visualize the vastness of the Pacific Ocean, London, England, is as far from San Francisco as Ulithi was from the major Navy base at San Francisco. Our adversary, the Japanese, had figured that same vastness would make it near impossible for the U.S. Navy to maintain operations in the western Pacific Ocean. Tiny Ulithi enabled our warships to remain at war for a year or more without having to return to Pearl Harbor for refitting and repairs.

The miniscule island of Falalop was the site of a small Japanese airstrip. The Americans resurfaced the airstrip and expanded it to run the entire length of the island … actually, they extended the runway past the shoreline. Several of the smaller islands were developed into smaller airstrips to service smaller aircraft.

And Mogmog? The Seabees built a fleet recreation center big enough to oblige 8,000 enlisted men and 1,000 officers on a daily basis, including a 1,200-seat theatre with a 25-by-40 foot stage under a large Quonset hut roof – that took a little under 20 days to complete. Oh, and don’t forget to visit the 500-seat chapel.

The Japanese still controlled the Island atoll of Yap, about 120 miles west of Ulithi, which meant trouble was just over the horizon. The enemy mounted several air attacks during early construction but caused no significant damage. However, the Japanese submarine fleet launched a “secret weapon” against Ulithi: the Kaiten manned torpedo, on Nov. 20, 1944. The two “mother subs” attempted to launch eight Kaitens to attack the Americans at Ulithi, but three were unable to participate in the raid due to mechanical problems. The USS destroyer, Case, spotted one in the early morning and rammed it. Two Kaitens did get through, but only one had success. It struck and sank the oiler USS Mississinewa at 5:47 a.m. The Japanese launched a second Kaiten attack in January of 1945 using “mother sub” I-48. The USS destroyer Conklin depth-charged I-48 before she could launch her Kaitens. I-48 went down with all 122 of her crew.

The Japanese, however, still had one of their last-ditch effort punches to utilize: the Kamikaze suicide planes. On March 11, 1945, Kamikaze aircraft hit Ulithi in a nighttime raid. Damage was done. One struck the USS aircraft carrier, Randolph, on her stern starboard quarter. The Randolph had left a cargo light on despite the black out. Twenty-seven men were killed, including four that were missing in action and five who were transferred to the hospital ship Relief where they later died. Another 105 sailors were wounded. One Kamikaze intentionally crashed on a small island called Sorlen. It is believed the Japanese pilot mistakenly assumed a light coming from a signal tower was actually the superstructure of an American aircraft carrier.

By March of 1945, 647 ships were at anchor at Ulithi. As sizable amphibious forces arrived for the invasion of Okinawa, the fleet at anchor numbered, at its peak, 722. In late June, a virtually unknown mission by the Japanese was diverted to attack the Ulithi Atoll. The super submarines, I-400 and I-401, both able to launch aircraft, were en route to attack the Panama Canal when diverted to attack Ulithi. The mission never took place. Two atomic bombs ended the war before the super subs had time to complete their new mission.

Once Leyte Gulf in the Philippines was secured, tiny Ulithi Atoll was abandoned. Few American citizens had heard about Ulithi and by the time Navy security released information concerning the anchorage, there were no reasons remaining for the media to print stories about it. You see, war is mobile, it moves on to new locations, new battlefields, and new anchorages. But for seven months near the end of WWII, the large lagoon of Ulithi was the biggest and most active port-of-call in the world. The total number of American military personnel who saw, lived, and experienced tiny Ulithi Atoll was most likely in the tens of thousands, if not more. Today, the peaceful atoll is inhabited by no more than 800 souls.

A tiger at the Bronx Zoo tests positive for coronavirus