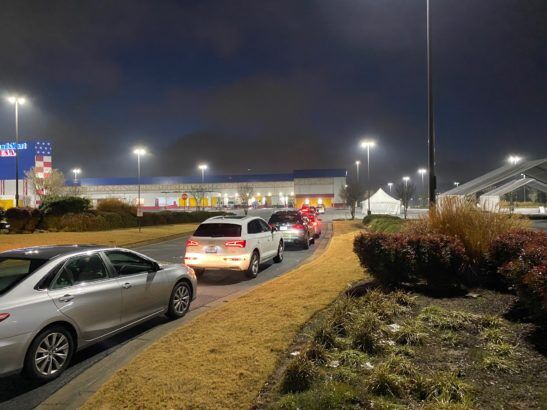 Cars wait in line in the early hours of Jan. 12, 2021 at the BrandsMart in Doraville to receive their COVID-19 vaccine shots. 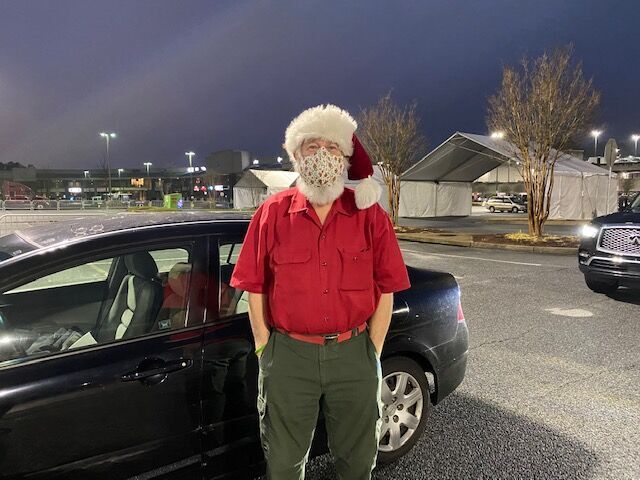 "Santa" Rick Rosenthal waits in line in the early hours of Jan. 12, 2021 to receive his COVID-19 vaccine shot.

It felt like Christmas when “Santa Rick” Rosenthal, who runs Northern Lights Santa Academy in Atlanta, snagged a rare slot to receive one of the first COVID-19 vaccines doled out to seniors in Georgia.

He didn’t even mind that his appointment was at 5:20 in the morning.

The 68-year-old finished treatment for Stage 4 cancer that had settled in his legs last September. His 91-year-old father-in-law died of COVID just a week before.

A vaccine against a virus that’s proving to be more deadly for seniors and those with significant pre-existing health conditions could save his life and his livelihood.

“I’m thrilled to have the opportunity to get this. I am in a high-risk category, and even though Christmas is over, when you’re Santa, people come up to you. Santa could be a super spreader. We have to be very careful,” he said. His business trains people to play Santa.

Then it seemed some Grinch might have kept Santa Rick from his shot.

When he pulled into the parking lot at BrandsMart USA in Doraville, he joined a line of cars idling their engines to keep heaters running against the pre-dawn chill.

Everyone waiting had confirmed appointments with the DeKalb County Board of Health. But the white tents they were supposed to drive through for quick service were empty.

Joel Denbo, 67, of Brookhaven said he just assumed they were vaccinating people through the night the way they conducted mass vaccination for polio in the 1950s.

It was a shock to find no one was there to give the vaccines.

“I’m furious,” said Gerry Tosone, 66, “I haven’t been anywhere or done anything in months.” Her appointment was scheduled for 3:52 a.m.

“This is why we’re not going to get everyone vaccinated, because they can’t get their stuff together.”

No one was sure what to do. So they waited.

Across the country, the U.S. government’s race to beat back the pandemic with vaccines, dubbed Operation Warp Speed, has faltered in its last phase — getting badly needed doses to the public.

In Florida, seniors camped out overnight in long lines for first-come, first-serve doses. The demand caused many health departments to rethink that strategy and switch to appointment-only bookings instead. Across the country, seniors eager to secure a shot have crashed phone lines and websites.

Craig and Kathy Chastney of Decatur had each jumped on one of their two home computers and kept refreshing the link for two and a half hours before they secured their slots on Friday.

“I have been up all night I was so excited,” Kathy said. The Chastneys haven’t seen their grandchildren in Texas for a year. The vaccines would give them their family back.

When they realized their 6:15 a.m. appointments weren’t happening, they tried to rebook only to discover they couldn’t get an appointment until spring.

Across the U.S., the system was so overloaded that some health departments began offering appointments just to get an appointment, starting a wait list so people could be contacted when new appointments opened up.

The pain of the rocky rollout isn’t evenly spread. Instead, new data show the problems are concentrated in states that can least afford to have them.

“It’s worrisome right now that we’re seeing that the bottom states for this are all Southern states,” said Amber Schmidtke, a microbiologist who has been analyzing COVID data trends.

New data show the bottom 5 states for vaccine administration are all in the South, a region that’s home to the nation’s poorest and sickest patients, according to the CDC.

In these states, patients are more likely to fall ill with COVID, they’re also more likely to die of it, according to a new report from the nonprofit precision data initiative Surgo Ventures, which has ranked counties based on a vulnerability index. The vulnerability index takes into account more than 40 different variables, including factors such as age, income, education, race, population density, and health care to give areas a score between 0 and 1.

Those states contrast with North Dakota, which has a low score of .1 in its vulnerability to COVID and has used more than 80% of its doses, and West Virginia, with a score of .18 has doled out 67% of the doses it has received, for example.

“Vulnerable communities have had an extremely hard time of it this past year and not necessarily always gotten the support and the resources that they deserve and need, and then to see that exacerbated with the vaccine rollout is incredibly alarming,” says Christine Campigotto, who manages the COVID program for Surgo.

Those disparities could worsen if the federal government carries through on a plan, announced Tuesday, to allot new doses partly based on how quickly states are passing shots out now.

In two weeks, states will get new doses based on the “pace of administration” and the share of their populations over age 65, said Alex Azar, secretary of the U.S. Department of Health and Human Services, speaking at a press briefing.

Azar said that would give states strong incentive to correct any faulty reporting and keep doses from being stored away in freezers by hospitals.

But experts said they are worried the new formula could doom states that have done little else to control the rampant spread of the virus.

Georgia is No. 6 in the nation in terms of receiving doses, but as of Tuesday, was 47th among states for administering shots. If doses are adjusted down, “That might mean Georgia will be among the last states to vaccinate its population,” Schmidtke added.

“We expect [providers] to be administering those doses quickly and as safely as possible,’’ he said in a press briefing. If that does not happen, Kemp said, the state will take possession of those vials. “If it takes me firing up my pickup truck and doing it myself, so be it.”

Eric Nickens, a spokesperson for the DeKalb Board of Health, blamed a computer glitch for the problems at the BrandsMart USA site. He said scores of eager seniors had jumped on a sign-up link that accidentally went live on the site before they had set the booking system with the correct hours. He estimated said everyone who booked one of the early slots would have their appointment honored.

“We deeply apologize for the inconvenience this may have caused. We’re pleading with the public for patience. There is only so much vaccine,” Nickens said.

Around 9 a.m., after waiting for four hours in the cold in his shirt sleeves –“I’m from the North Pole, I’m used to it,” he said — Santa Rick finally got his shot. He made a video to send to his fellow Santas.

He told the nurse who gave him the shot he would put her on the nice list.

Brenda Goodman is a senior news writer for WebMD. Andy Miller is editor and CEO of Georgia Health News.

Locust Grove, GA It is with profound sadness that the family o…