$1.99 for 3 days
Get Started
You are the owner of this article.
Edit Article Add New Article
You have permission to edit this article.
Edit
Home
News
Sports
Features
Find a Job
Opinion
Obituaries
Community
Place ad
e-Edition
Help

HAMPTON — The parents of a Forest Park man who died in September 2019 have filed a federal wrongful death lawsuit against the city of Hampton, Henry County and five police officers.

Octavio Rodriguez Cira and Fabiola Merlos Martinez filed the 11-count suit on May 11 claiming their son, Fernando Rodriguez, was robbed of his 14th amendment rights when police used excessive force, failed to intervene and failed to render medical aid to him. Additionally, they claim the county and city failed to provide proper training to police officers as well as failed to provide for the safety of arrestees and detainees, “including the handcuffing and restraint process.”

Rodriguez, 24, was found by Hampton police on Sept. 20, 2019, walking nude on Oak Street near the Atlanta Motor Speedway. Hampton police responded and Henry County officers arrived on the scene as back up.

According to the Georgia Bureau of Investigation, Rodriguez was tasered by officers from both departments. He began exhibiting signs of medical distress after he was subdued, GBI officials said.

Rodriguez was taken to Piedmont Henry Hospital and later transported to Grady Memorial Hospital where he died on Sept. 23, 2019.

The lawsuit is asking for “justice for the death of Fernando Octavio Rodriguez, who died an excruciating and humiliating death at the hands of officers.”

Officers Gregory Bowlden, Mason Lewis, Marcus Stroud, Robert Butera and Quinton Phillips have been named as defendants in the case in addition to the city and county.

The suit claims Rodriguez was tasered at least 15 times over the course of 10 minutes, followed by officers kneeling and standing on his back, neck, head, arms and legs “depriving him of oxygen.”

The lawsuit goes on to say that though officers noticed Rodriguez was not breathing they did not render aid, but continued to pin him to the ground until paramedics arrived. Medical personnel found him not breathing when they arrived, resuscitating him at least two times, the suit claims. 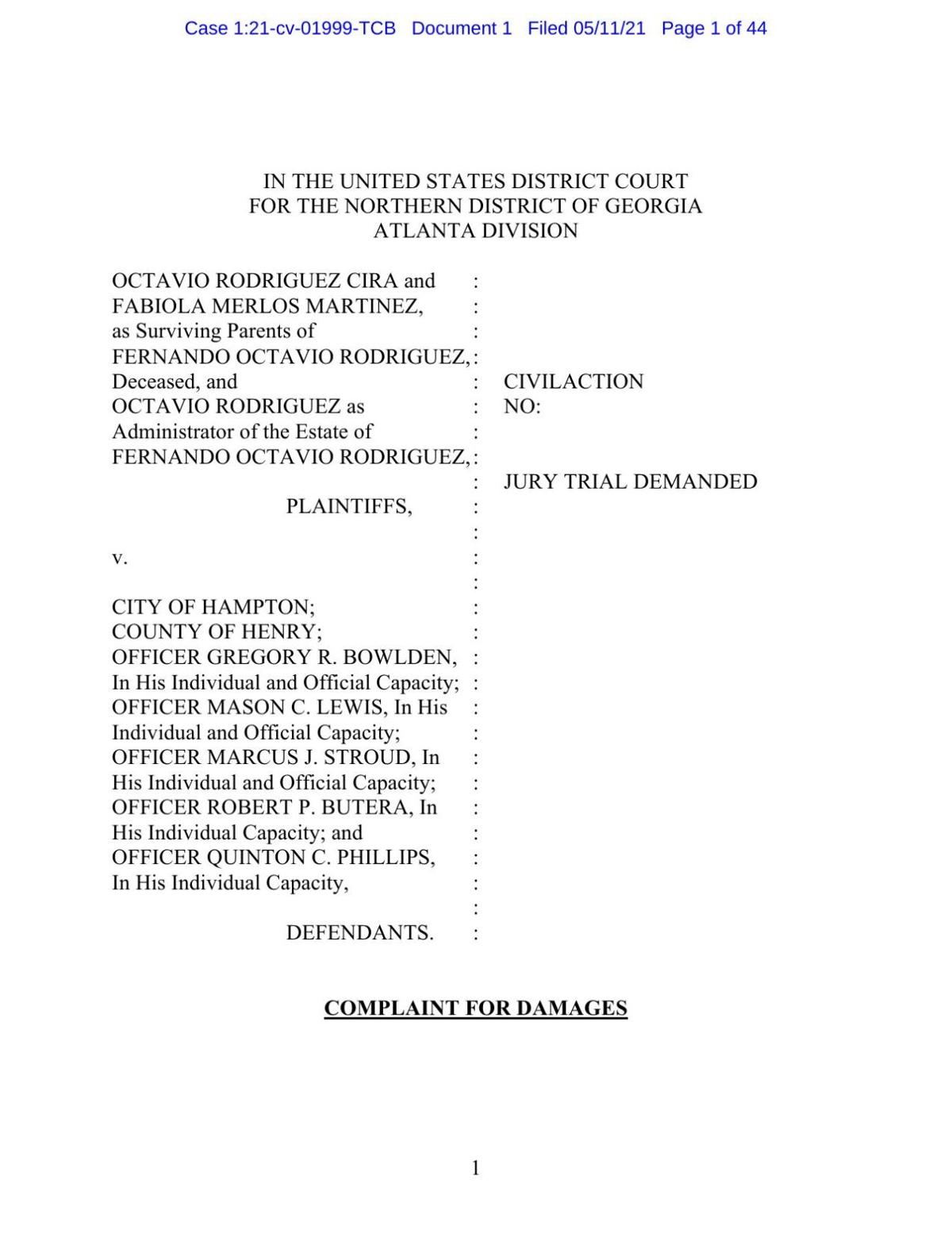 “The medical examiner ruled that Fernando’s death was a homicide and found the cause to be asphyxia due to physical restraint in prone position with compression of chest,” according to the lawsuit.

Rodriguez’s parents are asking for compensation for the full value of the life of their son, medical and funeral expenses, damages for mental and physical pain their son experienced prior to death and attorneys’ fees.

Stacker consulted a variety of sources to highlight a contribution from each state toward civil rights in America, along with what led to that historical moment and the change it brought. Click for more.

McDONOUGH — Five police officers in Henry County have been indicted in connection with the 2019 murder of a 24-year-old Clayton County man.