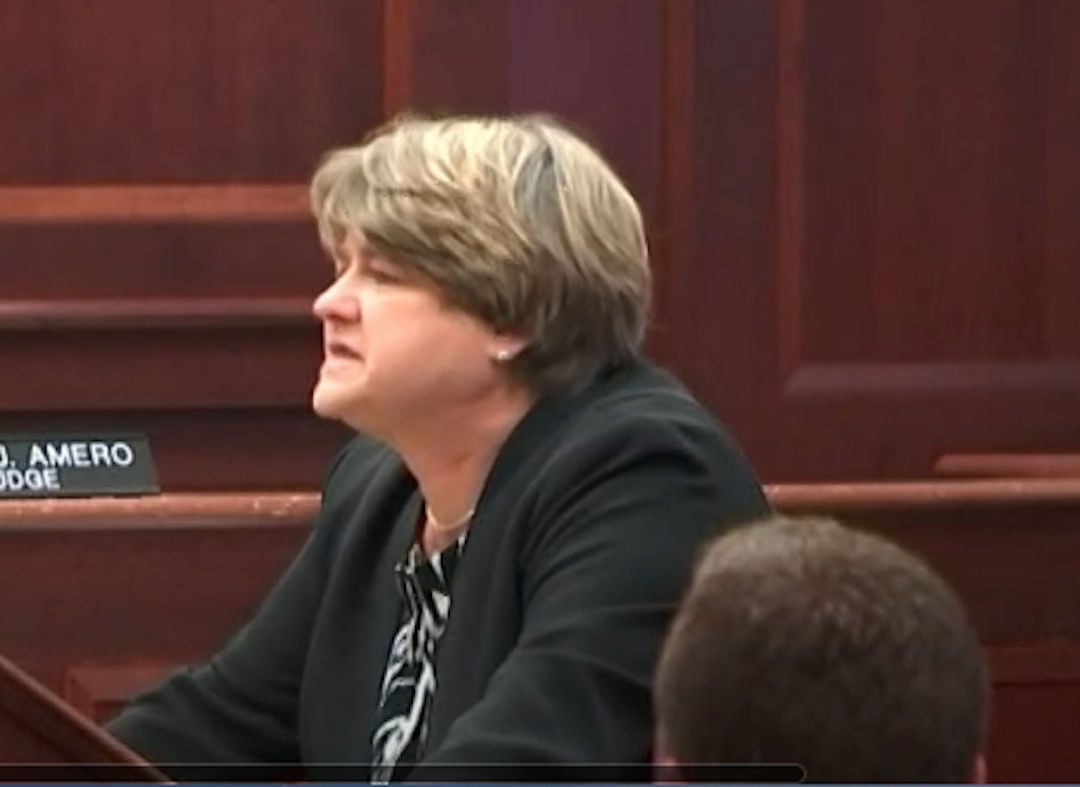 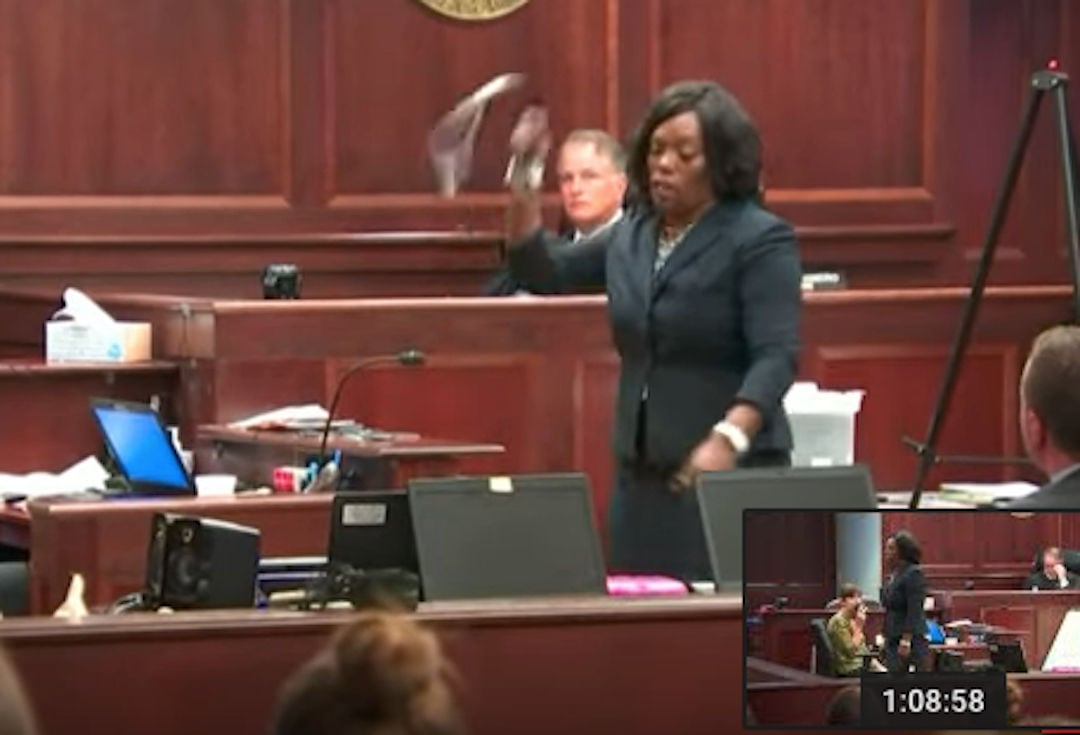 In a dramatic gesture, Prosecutor Daysha Young smacked a leather belt on a table during closing arguments in the murder trial of Jennifer and Joseph Rosenbaum. 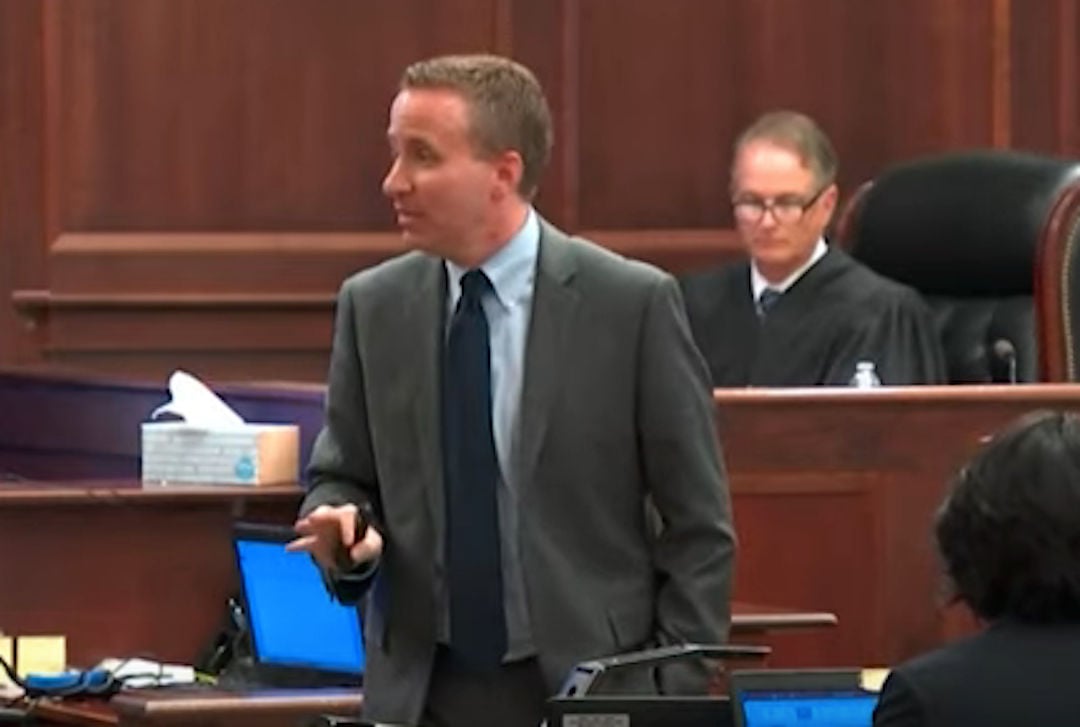 Prosecutor Edward Chase presents closing arguments to the jury in the murder trial of Jennifer and Joseph Rosenbaum on July 26. 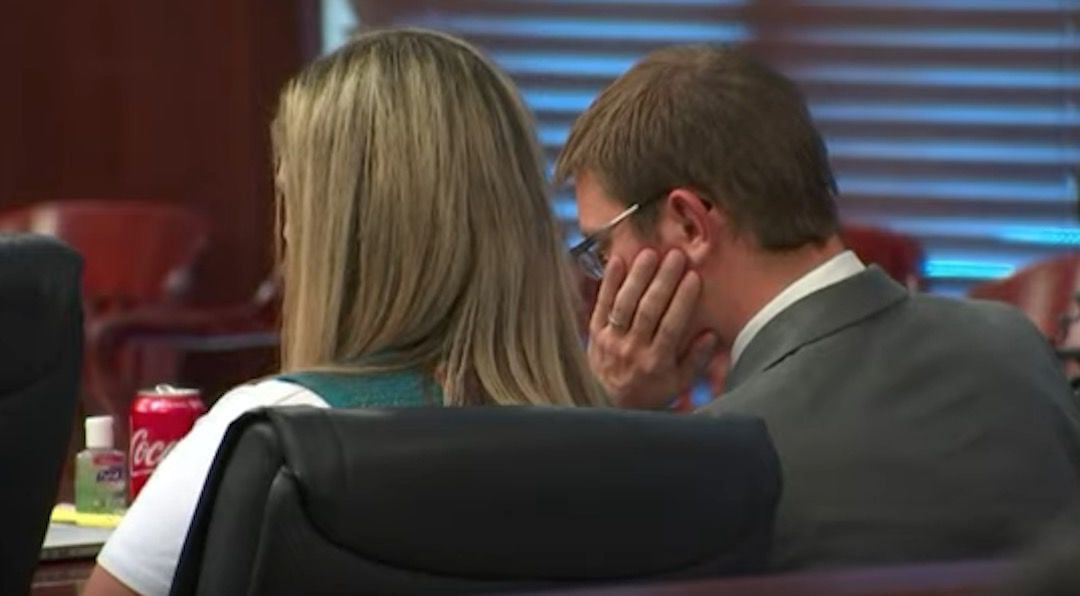 Joseph Rosenbaum (right) holds back tears as he and Jennifer Rosenbaum listen to closing arguments in their murder trial July 26. The Rosenbaums were found guilty on numerous counts in the murder and abuse of Laila Daniel and the abuse of Millie Place. 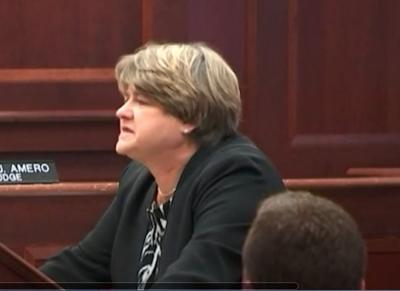 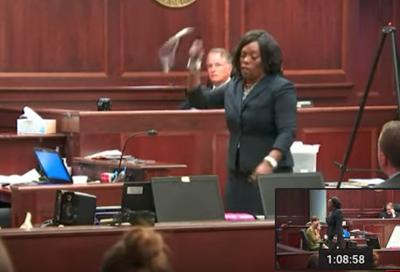 In a dramatic gesture, Prosecutor Daysha Young smacked a leather belt on a table during closing arguments in the murder trial of Jennifer and Joseph Rosenbaum.

Prosecutor Edward Chase presents closing arguments to the jury in the murder trial of Jennifer and Joseph Rosenbaum on July 26.

Joseph Rosenbaum (right) holds back tears as he and Jennifer Rosenbaum listen to closing arguments in their murder trial July 26. The Rosenbaums were found guilty on numerous counts in the murder and abuse of Laila Daniel and the abuse of Millie Place.

The couple is charged with murder, aggravated assault, aggravated battery and cruelty to children in the November 2015 death of foster child Laila Daniel, 2, and injury of her sister Millie Place, then 4.

DeKalb County Assistant District Attorney Edward Chase said the Rosenbaums had presented a “facade” to everyone around them, including Laila. “Let me remind you, this is why we are here today,” he said, showing the jury Laila’s photo. “A little girl who died too young, and Millie Place, whose life was forever changed by the four months she spent with these people.”

Chase reiterated the long list of charges and injuries, reminding the jury that they are the ones who determine whether a witness is credible. “Does it seem like maybe they’re being paid to do something, versus someone who has dedicated their whole lives to this type of work? I don’t know, Dr. (Lora) Darrisaw versus Dr. (Kris) Sperry?”

Sperry testified he had been paid $7,500 to serve as an expert witness for the defense.

As for Jennifer Rosenbaum’s claim that she wasn’t sure she was resuscitating Laila correctly, he said, “She’s a third-year law student at Emory. She knows the mechanism. She knows how she caused the injury. It’s interesting that she tells everyone from the get-go ‘I don’t know what I’m doing.’ Could that be because she’s laying down her defense? She took criminal law already.” Despite Laila’s abdominal bruising, “None of the bruises are in the area where the heart is located. Isn’t that interesting?”

“She died a painful and slow death,” Chase told the jury. “And think about this. The last person she saw was the person who killed her.”

Defense attorney Corinne Mull said, “It has taken them three attorneys and three weeks to tell you this is the simplest case you ever saw. What is this case about? A rush to judgement.”

Mull said “the authorities” were worried because “money was at stake, people were talking about ‘owning DFCS.’ To let it go by without a show trial like this would have been negligent at best.”

She insisted Laila’s death was accidental. “Yes, it was the Heimlich maneuver gone bad.”

Mull questioned why witnesses who thought there had been abuse did not call the police or DFCS before Laila died.

“Joseph is charged in this case for one reason and one reason only, and that is to try and get him to turn on his wife .... He did not see abuse. He was working two jobs, he came home, he babysat.”

Mull showed the jury two photos of Laila, one with a small mark on the child’s cheek and another with a few small bruises on her legs.

The state saved its fire for the final presentation. Assistant DA Young excoriated the Rosenbaums repeatedly, calling them “disgraceful” and “liars.” She told jurors, “You get to listen to the 911 call. Does she sound like she’s been breathing hard, pressing hard? I submit to you CPR didn’t kill her. The Heimlich didn’t kill her. She didn’t do it ... She was attempting to save Laila’s life. A lie. The EMT told us she was dead when he got there.”

She praised Millie’s “resilience,” adding “Never have I seen a defense attorney put a child through nearly an hour-long cross examination. It’s distasteful. And it made me angry.”

Mocking testimony that the child’s injuries were not consistent with patterned injuries, Young picked up a belt. “What happened was with Jennifer Rosenbaum, if she wasn’t getting dressed on time: Hurry up! Now!” she said, whipping the belt on a tabletop for emphasis. “That’s what it’s consistent with.”

In closing, Young said, “I sit with evil every day, and we have been sitting in here with some of the most evil people I have ever come across in my 20 years of prosecution. Evil prevails when good people do nothing. I ask that you not allow evil to prevail today.”

As Judge Brian Amero read the jury’s charge, Joseph Rosenbaum pressed his hand to his mouth, his brow furrowed and his face turning red. Jennifer Rosenbaum sat straight up in her chair, not moving.

“The integrity of the trial is in your hands,” Amero told the jury.

These 10 regions have the best real estate prospects for investors

ZeroDown analyzed data on 10 cities that have the best real estate investing prospects in 2021 and beyond by using data from the Emerging Trends in Real Estate 2021 report. Click for more.

Inside one major police department's effort to prevent Taser mistakes

Accuser testifies Ghislaine Maxwell told her she 'had a great body for Epstein and his friends.' She was 14.

Plumber who found cash stashed in wall of Joel Osteen's church getting $20,000 reward

POLL: Are you planning to give more to charitable organizations this holiday season?

Accuser testifies Ghislaine Maxwell told her she 'had a great body for Epstein and his friends.' She was 14.

‘The Boys’: Nick Wechsler Suits Up as Blue Hawk in a Season 3 First Look (PHOTO)