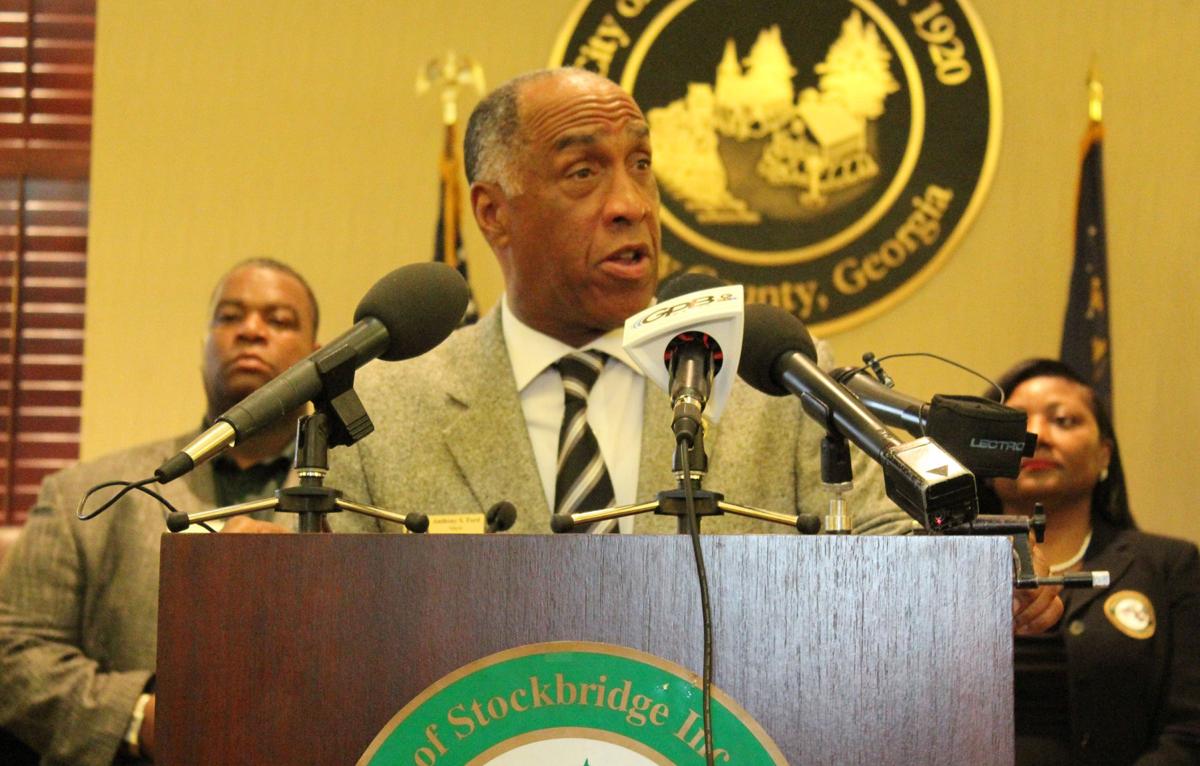 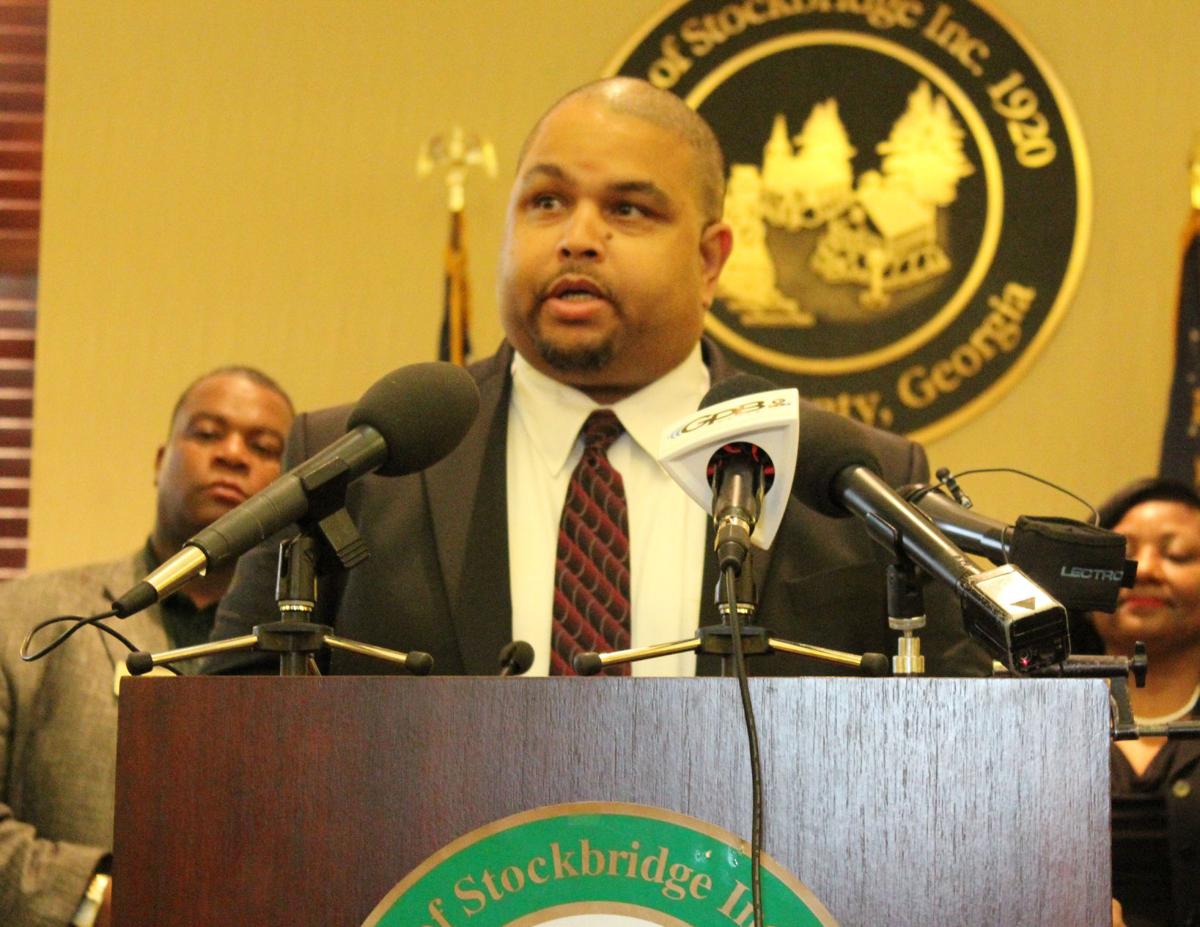 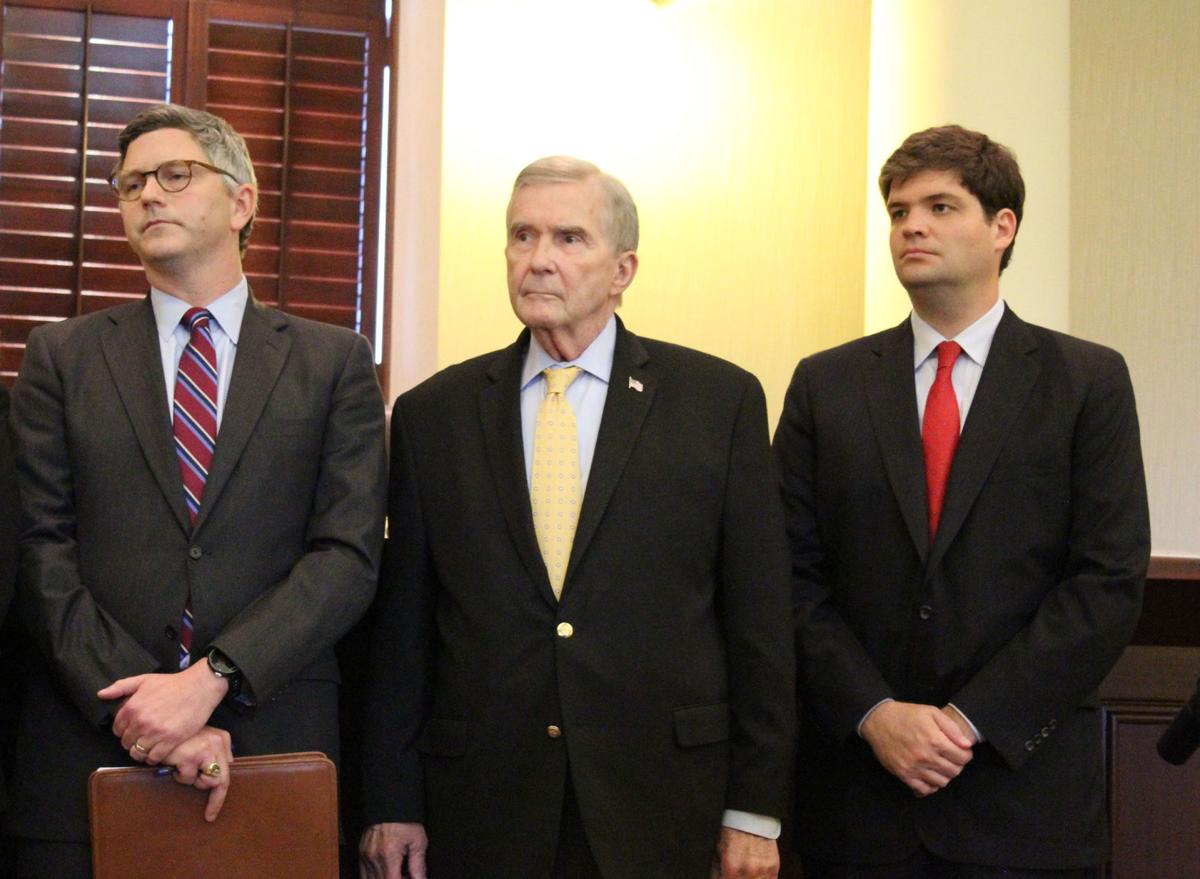 Attorneys Chris Anulewicz, Michael Bowers and Stephen Quinn, among others, represent the city of Stockbridge in its legal fights to prevent a referendum into Eagles Landing cityhood, which, if passed by voters, would take land and a substantial amount of the city’s tax base away. (Staff Photo: Joe Adgie) 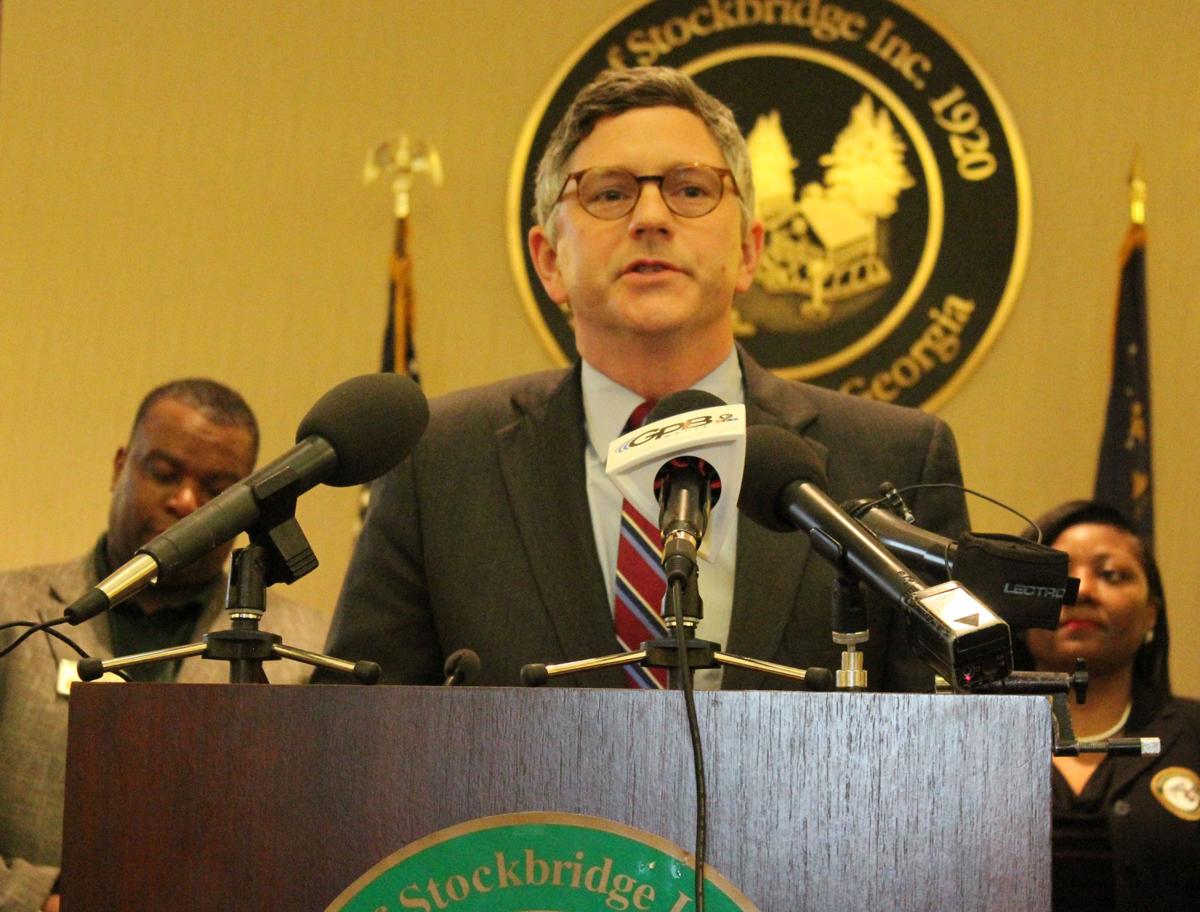 Chris Anulewicz, one of the attorneys retained by the city of Stockbridge, gives an update on a federal lawsuit filed arguing that the rights of voters have been infringed. (Staff Photo: Joe Adgie) 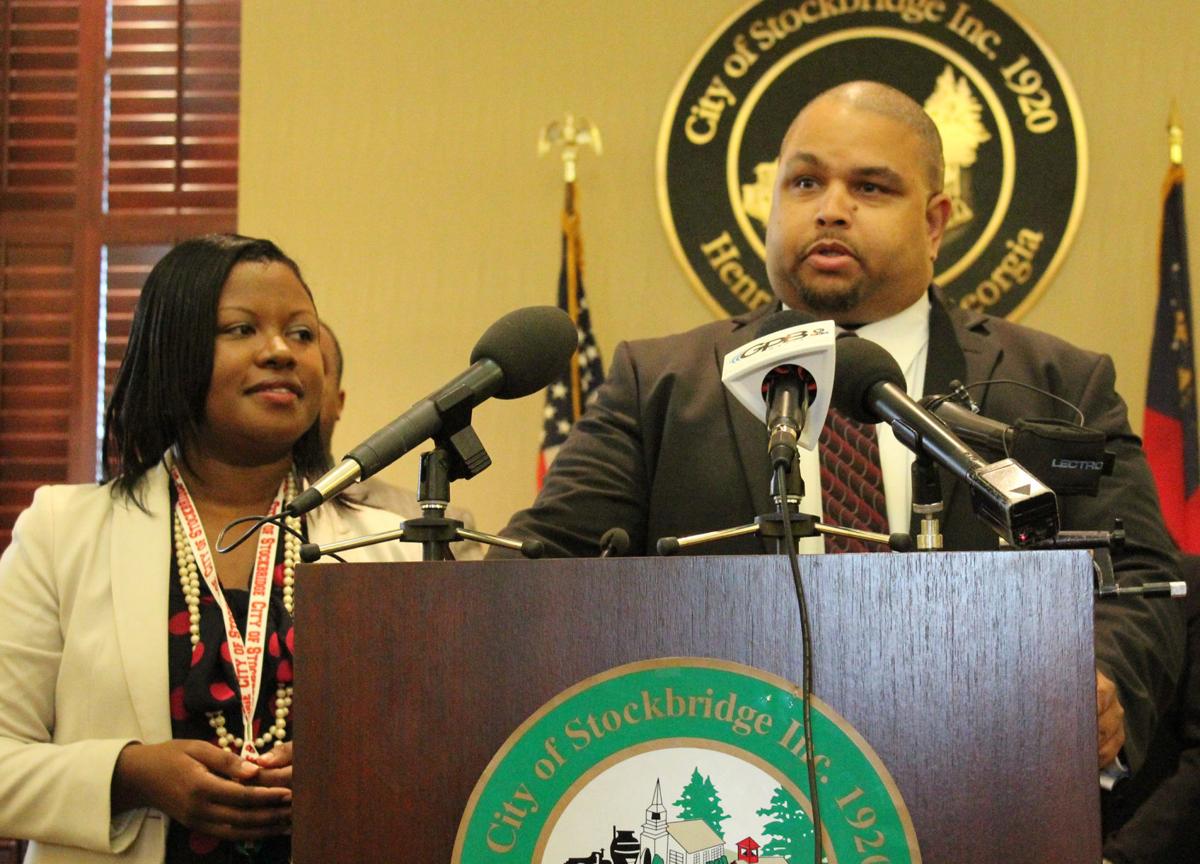 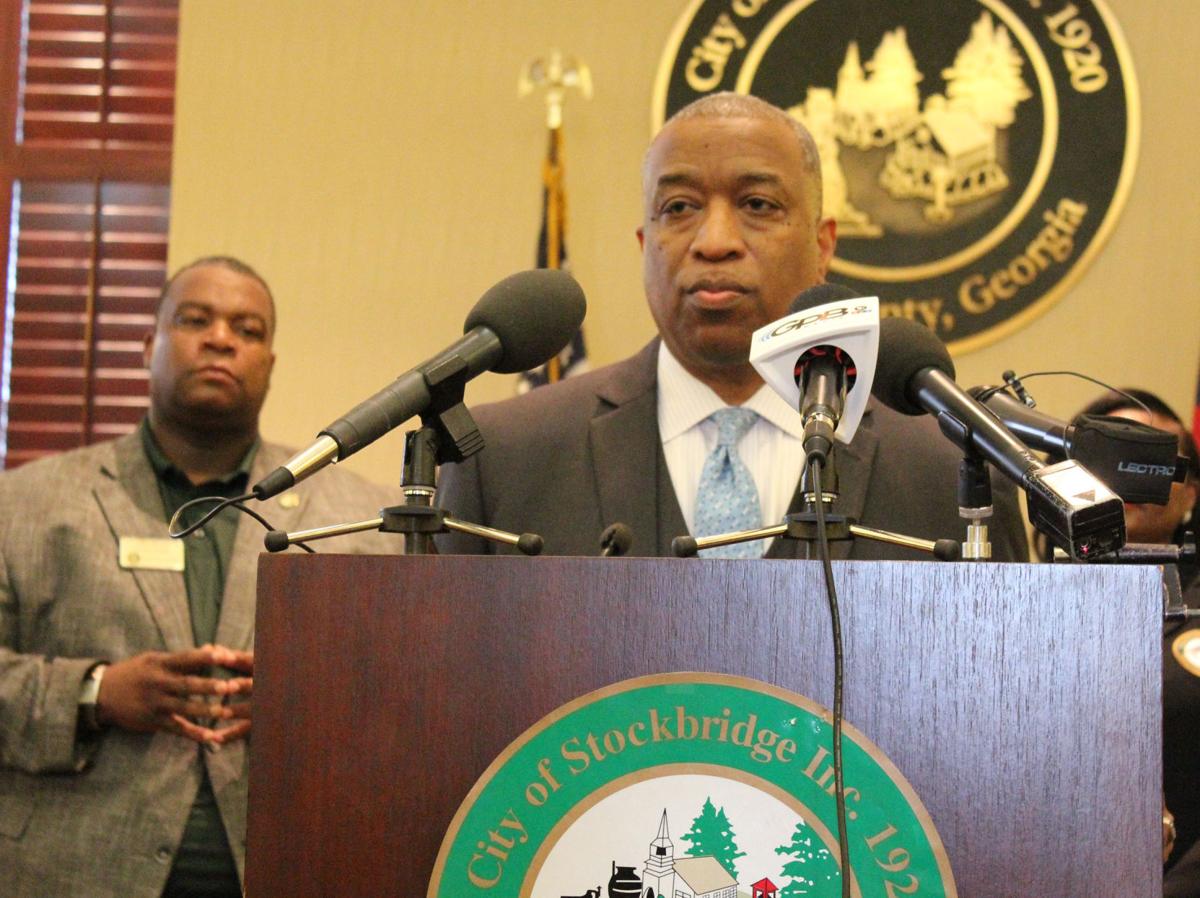 As Councilman John Blount looks on, Stockbridge City Manager Randy Knighton provides an update. Blount and Elton Alexander would be removed from the Stockbridge City Council if the Eagles Landing referendum is passed by voters. (Staff Photo: Joe Adgie) 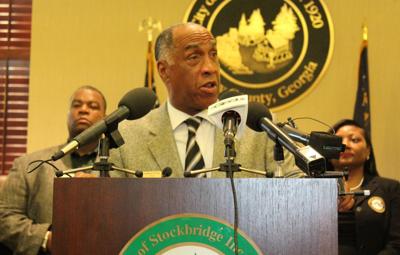 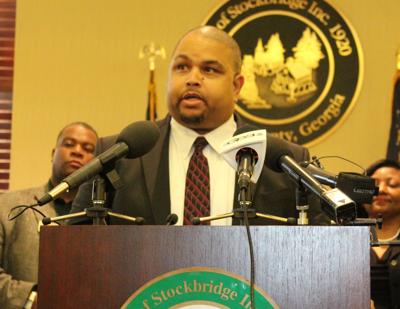 Attorneys Chris Anulewicz, Michael Bowers and Stephen Quinn, among others, represent the city of Stockbridge in its legal fights to prevent a referendum into Eagles Landing cityhood, which, if passed by voters, would take land and a substantial amount of the city’s tax base away. (Staff Photo: Joe Adgie)

Chris Anulewicz, one of the attorneys retained by the city of Stockbridge, gives an update on a federal lawsuit filed arguing that the rights of voters have been infringed. (Staff Photo: Joe Adgie)

As Councilman John Blount looks on, Stockbridge City Manager Randy Knighton provides an update. Blount and Elton Alexander would be removed from the Stockbridge City Council if the Eagles Landing referendum is passed by voters. (Staff Photo: Joe Adgie)

STOCKBRIDGE — Two lawsuits have been filed in the past few days regarding the Eagles Landing cityhood referendum, one by the city of Stockbridge, and one by Capital One Public Finance, the municipal funding arm of Capital One.

The city of Stockbridge has filed a civil rights lawsuit in federal court regarding what attorney Chris Anulewicz called an “unprecedented act” by the General Assembly to pass legislation regarding Eagles Landing cityhood.

“It guts the city of Stockbridge, impairs citizens’ right to vote and financially ruins the city,” Anulewicz said, “All to make a country club a city.”

Anulewicz said the federal suit, the second lawsuit filed by the city, makes three claims, two of them dealing with voting rights.

“Citizens in the city of Stockbridge, minority citizens, African-American citizens, who are part of a 53 percent voting bloc in the city, are taken out of the city to be put in a minority position in Eagles Landing,” Anulewicz said. “It violates the equal protection clause in the (U.S.) Constitution and violates the federal Voting Rights Act passed in the 1960s.”

He also said the new city would violate the contracts clause under the Georgia and U.S. constitutions.

Anulewicz said while “a huge part” of the city’s financial viability would go away, the city would still be obligated to take care of its financial commitments made in 2005 and 2006 for the new City Hall.

“They’d be saddled with debt without the ability to pay,” he said. “That’s not only not fair, but the constitutions of the United States and Georgia expressly say you can’t substantially impair an existing contract. Bond commitments in the contract are significantly impaired.”

Expressing a similar concern, Capital One Public Funding, the municipal funding subsidiary of Capital One, filed a lawsuit in U.S. District Court’s Northern District of Georgia on Aug. 17.

According to the filing, Capital One Public Funding owns $11.75 million of Stockbridge’s bonds filed in 2005 and 2006 for the City Hall.

COPF argues in the filing that “the collateral that was contractually promised and pledged to COPF as security… will be severely reduced and cause COPF irreparable harm should de-annexation occur” as the city’s ad valorem tax base would shrink by half.

The proposed city of Eagles Landing, if it is approved by voters in November, would not be responsible for paying any of the debt taken by the city of Stockbridge, and Eagles Landing advocates have opposed taking on Stockbridge’s debt as that debt was incurred for projects that benefit Stockbridge.

In total, three lawsuits are pending concerning the Stockbridge/Eagles Landing dispute. The third lawsuit, which was heard in Henry County Superior Court last month, questioned the constitutionality of the legislation that was passed for the referendum.

That lawsuit was decided in Eagles Landing’s favor as Judge Arch McGarity denied a motion to halt the referendum, stating he was in favor of letting the voters decide what city they wanted to be a part of. McGarity’s decision was appealed by Stockbridge to the Georgia Supreme Court.

Michael Bowers, the former attorney general of Georgia who is also representing the city of Stockbridge, said they are awaiting the docketing of the case.

“The Supreme Court will tell us when it’s time to file a brief,” Bowers said. “We’ve already drafted a brief, it’s sitting on mine and Chris’s (Anulewicz) desk, and as soon as the docketing occurs, we’ll send them the brief.”

Two members of the Stockbridge City Council, John Blount and Elton Alexander, have been named plaintiffs in the federal suit filed by the city of Stockbridge.

The two council members were named plaintiffs as they would be stripped of their City Council positions if a majority of voters decide in favor of Eagles Landing cityhood, as the two live in the proposed Eagles Landing city limits.

Blount’s and Alexander’s terms expire Dec. 31, 2019, but both would be immediately removed from the council if the referendum passes.

“With the actions that went forward and went through the General Assembly, what it essentially does is it removes me from the city of Stockbridge and puts me in the city of Eagles Landing,” Blount said. “When we talk about people having the right to vote, I’m trying to figure out where these people are at, because nobody came to me or my neighbors. Are we talking about the people in the gated community, or their friends under the Dome that pushed the bill through, or the judge that said this was wrong but yet let it go through? Who are they talking about? The people that should have the right to vote to keep me as their elected official, I’m trying to figure out whether they count.”

Blount said people should have their say-so in a matter that affects the city where they live.

Brad Pitt panicked about his dialect in Snatch

Robert Pattinson felt like a 'douche bag' with moustache

Jon Rahm on top heading into final round at Torrey Pines