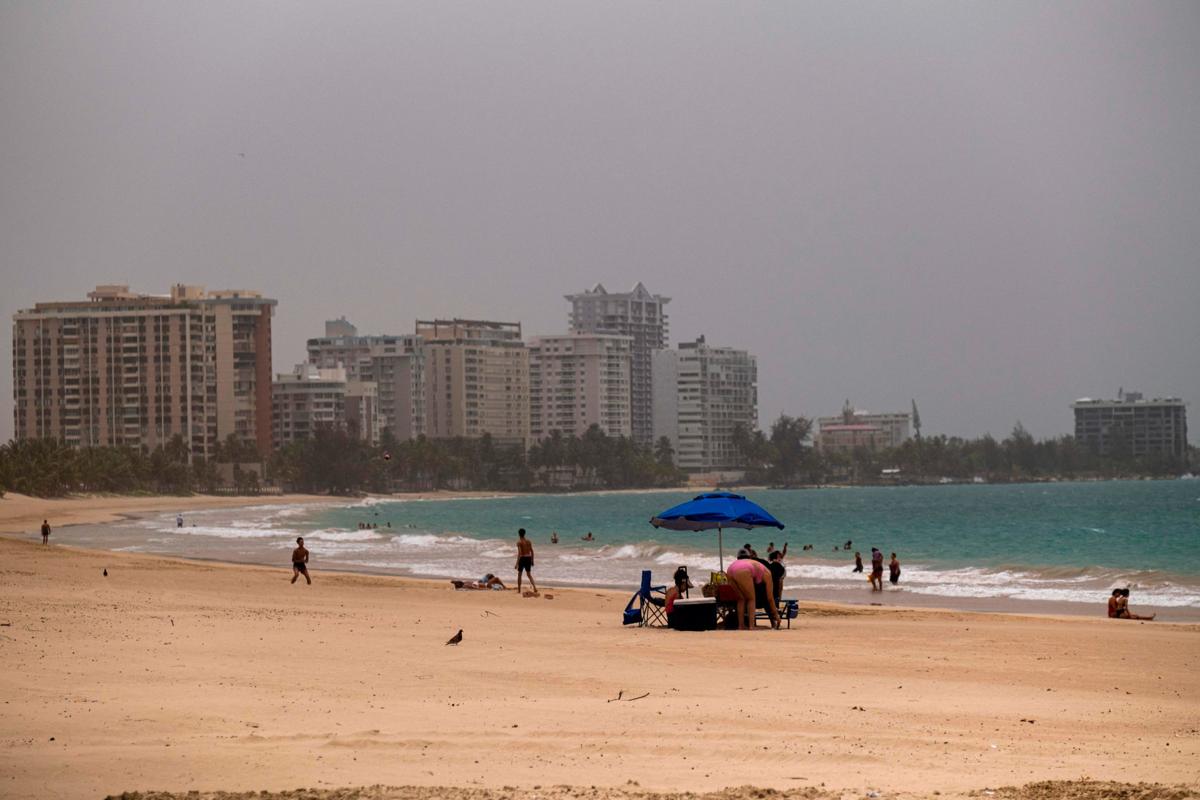 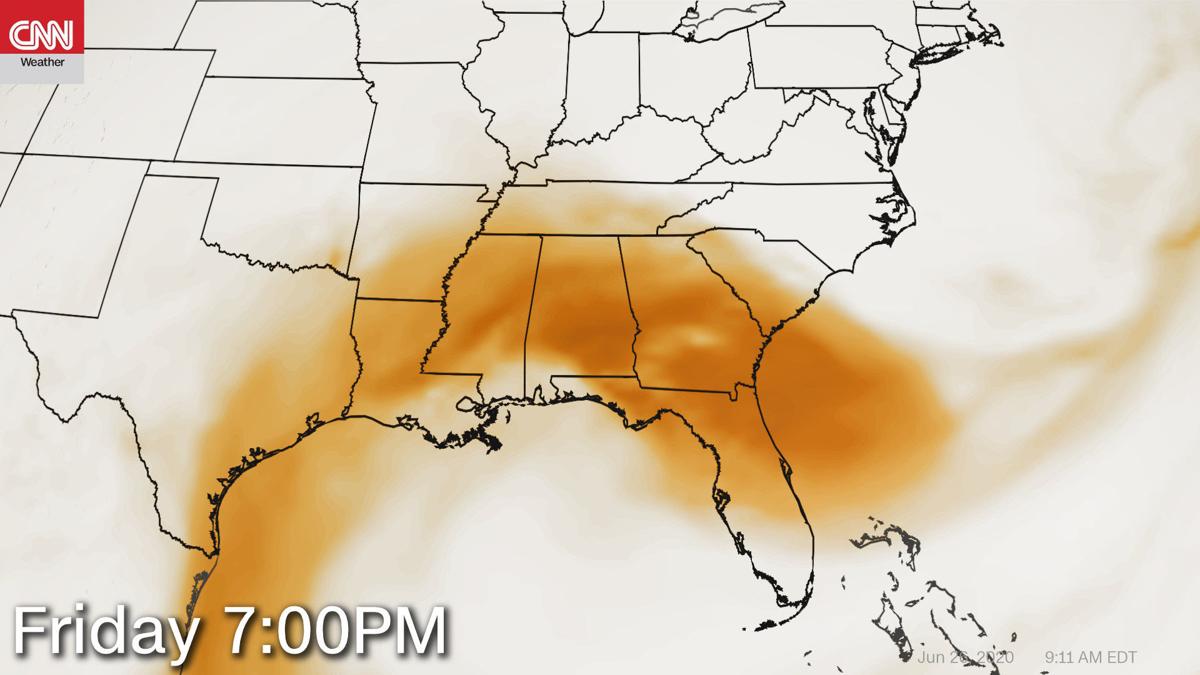 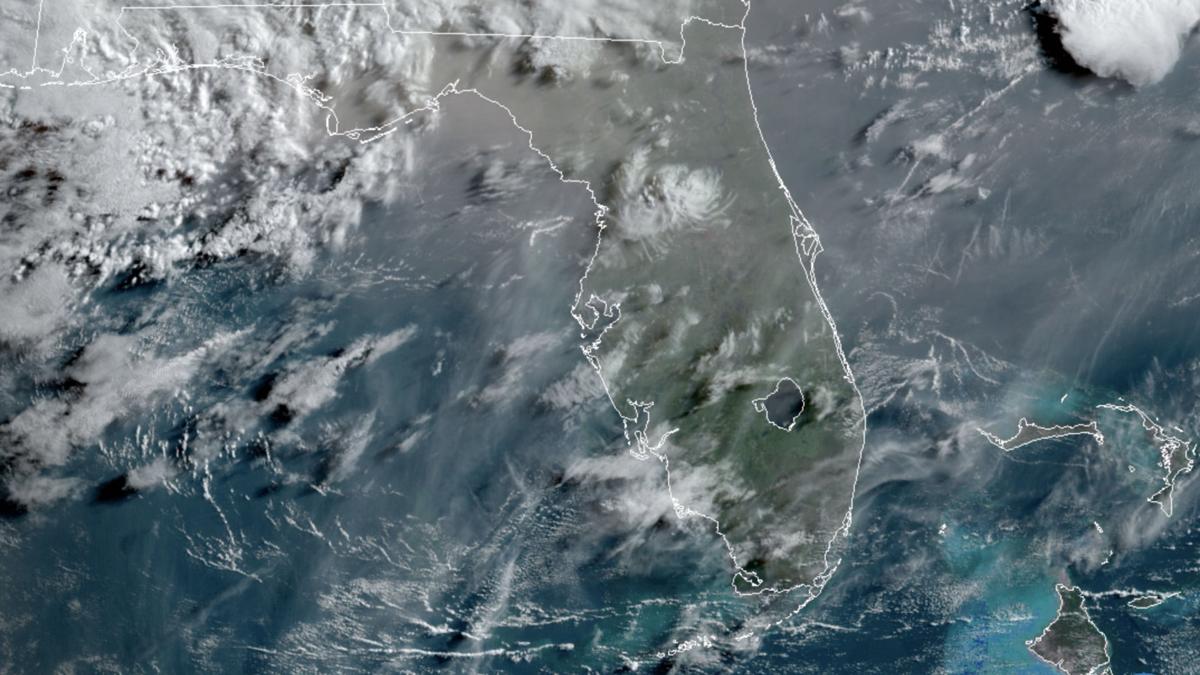 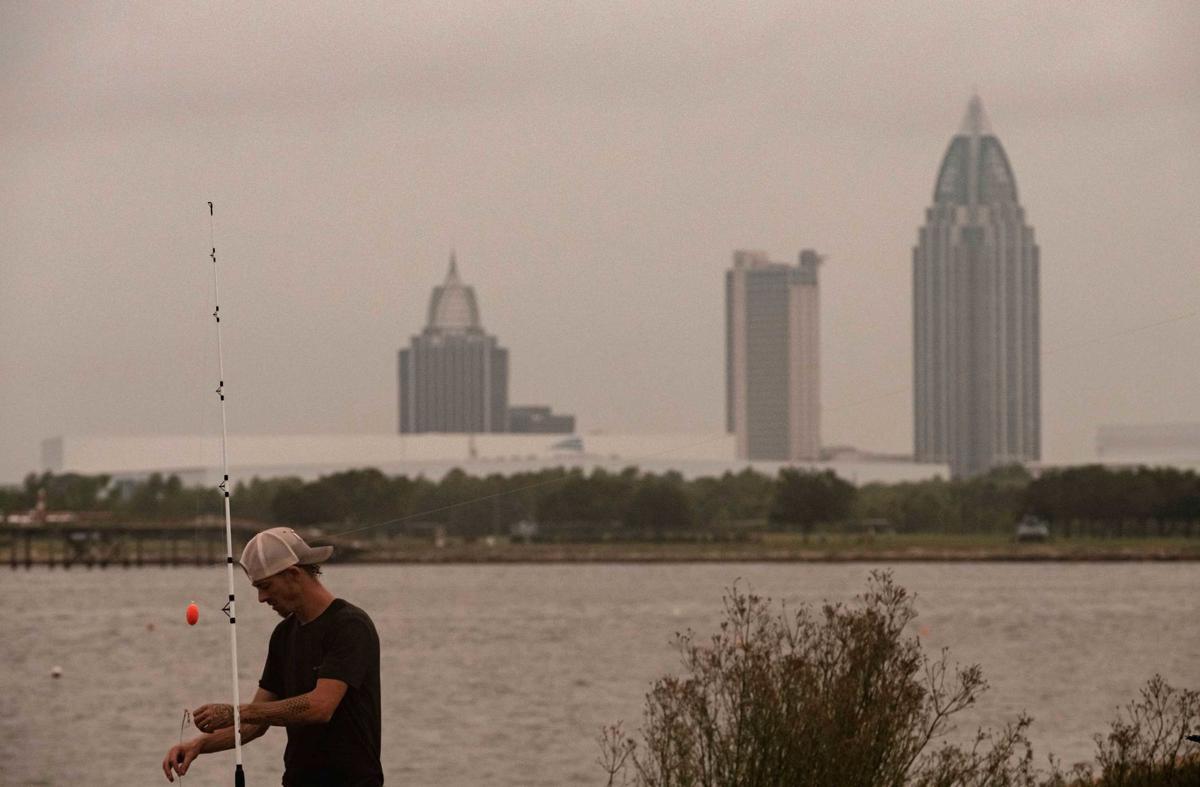 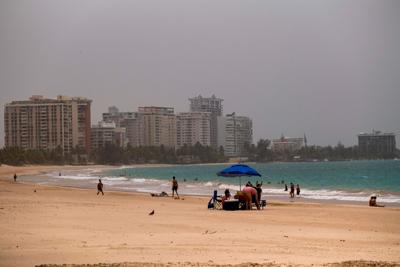 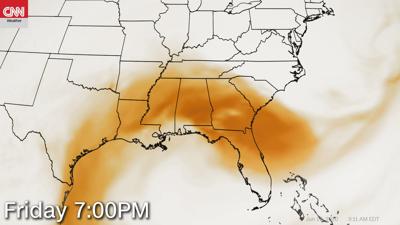 Saharan dust from Africa is blanketing the Southeast Friday and will hang around through the weekend.

The plume is easy to track on satellite imagery where viewers can animate its journey to see the historic concentration of dust as a giant brown mass traversing the 5,000 miles.

As of Friday morning, dust was covering “the Sunshine State,” making it look more like “the Hazy State.”

“Saharan dust is definitely in place over Florida. No clouds or fog, just atmospheric dust creating the haze. You can’t even see the horizon,” says CNN meteorologist Brandon Miller who is in Flagler Beach.

Looking at before and after images from that part of Florida to the northeast of Orlando, you can see the difference the dust can make on the horizon in Flagler.

It will stretch from Texas to South Carolina and a thinner amount could even reach the Midwest.

However, dust will likely have some impact on the surrounding states, including Texas, Arkansas, Tennessee and the Carolinas Friday.

By Saturday, the dust disperses across the eastern half of the US. The higher concentration will remain in the South but shouldn’t be as strong as Friday.

“The main impacts of the Saharan dust will be hazy skies during the day, locally reduced visibility, and degraded air quality,” says the Weather Prediction Center.

“However, this could also make for some very colorful sunrises and sunsets with deeper oranges and reds compared to normal.”

Images taken Friday morning revealed the impact dust was having across the south.

The downside to the dust is the air quality.

Moderate to unhealthy air is being reported all across the Southeast, according to Airnow.gov.

“This Saharan dust has traveled a long distance and most of the larger particles have fallen out along the way,” CNN meteorologist Chad Myers says. “What is left is the tiny — PM2.5 and smaller — dust particles. This type of pollution is more dangerous to the lungs than larger particles.”

This drier air could also allow temperatures to soar higher than they usually do during the day, the Weather Prediction Center warned. Temperatures in Florida could reach record highs Friday and Saturday.

This Saharan dust plume is historic

“The ongoing Saharan dust outbreak across the tropical Atlantic is by far the most extreme of the MODIS satellite record — our most detailed, continuous record of global dust back to 2002,” tweeted Atmospheric Scientist Michael Lowry.

“It is definitely historic,” Olga Mayol-Bracero, a researcher at the University of Puerto Rico, told CNN Weather.

“We knew we were going to be in an extraordinary situation.”

Many of her colleagues across the Caribbean said they have not seen air quality conditions this bad in their entire careers, she said.

Aerosols, measured in PM10, at Mayol-Bracero’s research station in northeastern Puerto Rico, have never reached the levels they have seen the past few days.

Records at the station there go back 15 years.

The dust was so thick in Puerto Rico and across the Caribbean, it darkened the skies and reduced visibility to only a few miles.

While many people will find the Saharan dust plume puzzling and even alarming, it is not actually new. It is called the Saharan Air Layer or SAL by scientists who study it and its effects on hurricane development.

But scientists say this one is historic because of the dense concentration of dust.

“While it’s normal for Saharan dust to reach the US every hurricane season, this event is unprecedented in thickness and coverage,” Mauldin says.

“Usually by the time dust from the Sahara has traveled this far, much of it has been dispersed and/or deposited to the ocean so that typically this long-range transport to the Americas would involve much lower concentrations,” Claire Ryder, NERC Independent Research Fellow at the University of Reading, told CNN Weather.

How the Saharan dust plume got its start

The initial dust outbreak was driven by a few smaller storm systems over central and west Africa. Several of these thunderstorms caused downdrafts and large-scale haboobs, or dust storms, to develop. This led to a large amount of dust being lifted up into the atmosphere from the Sahara, Ryder said.

At the same time that these smaller dust storms were happening, the African Easterly Jet — strong winds higher in the atmosphere which usually transport dust westward — was anomalously weak this June.

That means a more significant amount of dust than usual was able to accumulate just off the west coast of Africa.

It then could be transported west in a very dense plume when the jet picked up speed again.

For 2020 election coverage, head to henryherald.com/election2020

Michael Jordan and Denny Hamlin team up to start NASCAR team, with Bubba Wallace as a driver