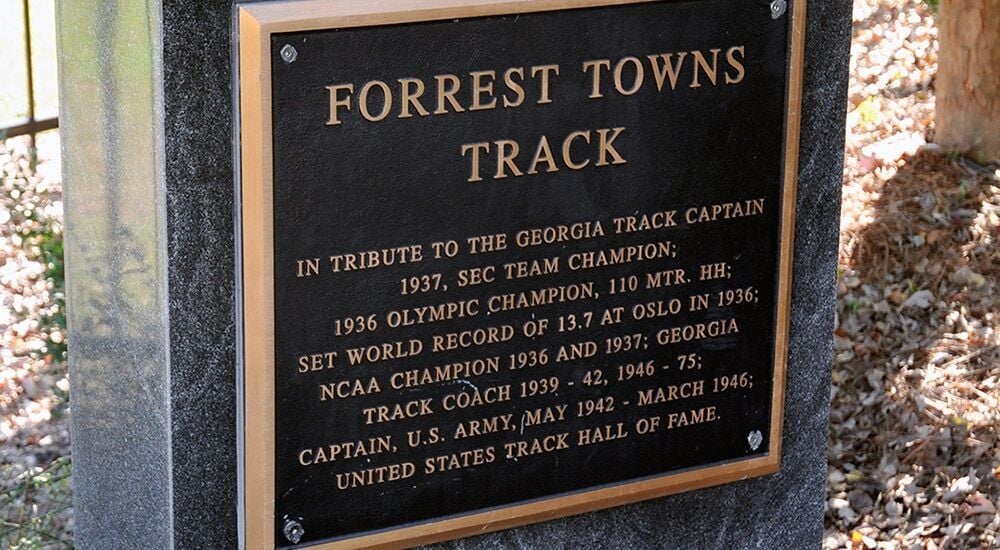 The University of Georgia's track is named in honor of Spec Towns. 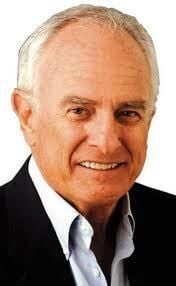 This summer, eighty-four years ago, Nazi Germany was peaking with its war production and would soon shock the world with its senseless aggression and heinous brutality, but was at parade rest in the summer of 1936 when Berlin would host the games of the XI Olympiad.

Taking a boat across the ocean, in the company of University of Georgia athletic director Herman J. Stegeman and his wife, Dorothea, was a freckled faced collegian from Augusta, Forest Grady Towns, better known as “Spec,” a dual sport star for the Bulldogs. Towns would compete for an Olympic gold medal in the 110-meter hurdles. The race, in U.S. competition, measures 120 yards but the distance between the hurdles is the same as in 110 meters.

Town was implacable and unrelenting when it came to training for his specialty. With a lanky build, he could straddle a high hurdle flat-footed. I saw him do that often when he was coaching the Bulldog track team in the late 1950s when I ran the mile for him.

The trip over to Germany was not a problem. He was never seasick, but as a small-town boy who was a vegetable advocate, the menu was not always to his liking. He admitted that he enjoyed wiener schnitzel, however. His body adjusted to all nuances of international travel; he was fit and in peak form for the race of his life.

Spec was a great champion. His story was of a small-town boy reaching the pinnacle in sports. One day his father and uncle placed a cane fishing pole on the top of their heads and Spec, a raw teenager, leaped over the fishing pole. Serendipity immediately reared an opportunistic head. The next-door neighbor wrote sports for the Augusta Chronicle. He witnessed this feat from his kitchen window and immediately contacted the Georgia Athletic Association.

As soon as Spec submitted to a workout in Athens, the football coaches claimed rights to his participation which was fine with the future Olympian who was happy to compete in football for a scholarship in return. He played end and played it well, but the track coach, Weems Baskin, saw a remarkable high-hurdles “diamond in the rough.”

Spec trained on wooden hurdles which appeared to the naked eye to be an Inverted “T.” You hit one and you were going to pay. (Late in Baskin’s life, he told me that if the “L” shaped aluminum hurdle was around in Spec’s day, he likely would have set records that might have never been broken.) When a hurdler hit the-old-style hurdle and crashed into the cinder track, the resulting language would make a boatswain mate blush. Spec also employed a training technique whereby he would balance a book of matches on each hurdle, knocking them over without hitting the hurdle. No hurdler of his time had better form, which is why Spec never lost a big race.

Spec had embarked on the trans-Atlantic voyage, the best high hurdler in the country — actually the best of all time. Now he was poised to become a world champion. Reflecting on Spec’s remarkable success, his career is confirmation that he was among one of the truly great amateurs. He hurdled for his county’s honor. There was no pot of gold at the end of his competitive rainbow.

For him, it was a short window, which heightens his greatness. Track and field superstars today enjoy substantial wealth. Still their window closes fast. It is not like a golfer who can play forever right into a Champions Tour largesse. As long as a tennis player’s legs hold out, he/she can compete and earn big bucks.

The career of a track athlete is like a thundershower in late summer. It comes with a rush and exits the same, which is why the best ones today, especially the superstars, turn professional after high school. Spec led Georgia to the SEC track championship as an underclassman and between 1935-37 won 60 consecutive races.

At Berlin, in winning the gold, he set a world record with a time of 14.1 seconds. His name as an Olympic champion is etched in the façade of the stadium today. Adolph Hitler was on hand to recognize the German gold medal winners and Spec remembered seeing him, for selected events at Olympiastadion, a showcase facility built for the Olympic games.

As a gold medalist, Spec was given a sapling from German’s Black Forest which Dorothea Stegman gave tender loving care on the trip back home, putting it in the hands of the UGA gardener, who was of German descent. The gardener nurtured it into maturity after planting it behind the original stands on the north side of Sanford Stadium. Spec remembers seeing many of his American teammates toss those potted saplings overboard once the ocean liner got underway.

From Berlin, Spec went on a tour which had been arranged by the U. S. Olympic committee, but he was not the least bit in agreement. He was ready to return home, not once thinking that he would soon be back in Europe for a different reason — trying to help the Allies win World War II.

When the exhibition tour reached Bislett Stadium in Oslo Norway, Spec was fit to be tied. He would be running the familiar 120-yard distance in his race. there, but he had had enough of Europe. He wanted go home. Three weeks after the Olympics in perfect conditions, he astonished the track and field world when he posted the sensational time of 13.7 in that high hurdles race at Berlin. Meet officials could not believe their stopwatches. It was a world record that would stand for 14 years, one of the great hurdles races of all time.

He then received a cablegram from his football coach, the clever Harry Mehre, who did not congratulate him on his electrifying record-setting race. Instead, the telegram read:

“Minor sports are over. It is time to come home. Football practice has begun.”

Peaceful Portland protesters will not be prosecuted to avoid 'irreparable harm,' DA announces